The highveld may not be much use for cultivating crops, but it's doing well for craft brewing. In the couple months I've been away, an upstart cohort has joined the scene. All were on show at the Joburg
Festival of Beer held on the 27th and 28th of September at the city's Pirate's Sports and Rugby Club.  More brewers and more beer can only be a good thing, but it's an increasingly a crowded field -- in this case a crowded rugby field -- almost everyone is gunning for the same slice of the market. In pursuit of the purse, branding has become so slick that there may soon be dress codes for the more exclusive products. One lives in hope that as palates also become more sophisticated, the demand for more varied and challenging tastes with elicit a market response.


The day started early and hot. Keen to get in before the crowds, I took advantage of the 10.30 to grab a morning coffee before hand with Ralph, Felicity and their little kiddo at the ever-twee Jozi Food Market. One of the first in the city, this quasi-farmers forum has as many fresh flowers, scented candles and baked goods as any mortal can handle. In other words, it's almost the same as the dozen of other markets now peppering the city. But in the warm spring breeze, the cloying cuteness was almost tolerable. After we made it past the jumping castle, the Mauritian made baby clothes and the zebra kitsch bedspreads (check out the bejewelled eyes), we stumbled on a series of large white tents looking more like an field hospital than a beer festival.  While there was a medical team on hand, that wasn't the kind of treatment we were looking for. Fortunately, with a 120 taps awaiting, we were sure to find something to help salve the week's pain.


Once we made it in, our first port of call was a fill up with Cape Town's Garagista Beer.  Only a few months on the scene, this Woodstock based brewer's taps were pouring samples of a apple-pomegranate cider and an English style India Pale Ale.  Despite being fairly cool on cider, I decided to give it a go. The result was confirmation as to why I don't normally drink the stuff.  With a taste suited to 3rd form snack time it didn't speak to us. The IPA, however, was remarkably full flavoured. Made with southern passion and cascade hops, its light fruitiness appealed where the pomegranate fell short. If anything it was a little watery -- alright for first thing in the morning -- but a fine contribution to the scene.

Next was a visit with an old Mzansi beer friend, Apiwe, and her new Brewhogs' Black India Pale lager. As previous entries attest, I've sampled others in her increasingly diverse rainbow offerings but hadn't yet got this one on my tongue what with it being launched just days before. Before we were allowed a taste, Apiwe inaugurated Ralph with an elaborate brewers briefing that brought him solidly into the beer family. Now well versed on varied beer trivia and types, we were allowed the BIPL. I'm not quite sure what makes this Indian or Pale in any sense, but there was no denying it had a good malty chocolateness with a burnt malty hint in the back. Balanced with Southern Passion and other hops (including dry hops added at the end), it tasted more like a smooth porter than what I had expected. As she's catering for dark beer drinkers who don't want a stout heaviness, this seems like just the right thing. I would probably pour this more regularly come winter, but this is a beer for all seasons.

We left Apiwe busy with a film crew and moved on to 'Just Brewing', a newly opened father and son operation out of Boksburg in the ever stylish East Rand. Offering a black ale, porter, chocolate coffee stout and a pale ale, they are already running on all cylinders (take that Garagista!). The most distinctive of the quartet was the pale ale brewed with an unusual strain of New Zealand hops. My mouth tasted vinegar countering an underlying sweetness. The brewers characterised this as tropical fruit, which is maybe a nicer way of putting it. While it was memorable at worth a taste (especially for free), I'm not sure I could manage a pint. Building on the dark beer trend, however, the porter was more traditional and more solid. Definitely worth a second look.

Another newbie from Joburg's fashionable outer suburbs, Swagga hails from Alrode, a place I had never heard of (apparently it's near Alberton). Launched about six months ago, they now market a blonde, a red. a weiss and an IPA. We tasted the red first which was both dark and cold, welcome features as the temps climbed into the high 20s. Beyond that, it was not particularly notable. The IPA had more flavour from its English hops (Kent Golding) mixed with a bit of Saaz. Alas, the beer was so cold and so carbonated that whatever delicate kisses the hops might have held were lost. The brewer claimed he's brought down the flavour and bitterness for the SA market in hopes of selling more (and more than one at a time).  While the IPA was still his favourite, the people loved the California blond. Seems he knows what the gentlemen prefer.

To break up our marathon, we decided to indulge in the Imperial Tequila Ale (ITA).  This has been around a while and I've always avoided the stuff, convinced it was little more than a gimick trying to find its place in the party market. Turns out,  this Mexican beer is aged in used tequila barrels which impart a light tequila and generally woody, resionous/vanilla taste which was surprisingly inviting. It may be hard to admit to friends or true beer heads, but I like this.Yes, it's cheesy and gimmicky but sometimes swallowing a tasty beer requires one to swallow your pride. Beats Corona hands down. Olé


Back to Mzansi we wondered over the the stylish but yet truly established Brickfields.  Only a few weeks old, they were pouring a contract brewed, 4% lager (made, as it happens, by Ms. Apiwe). As we spoke, work was underway in Johannesburg's Newtown district (once named the bricksfield) on a new brewery. When finished, it will occupy an old bird feed factory across from Carfax. As for the beer, well, it was a lager. Fresh, lean with what we were told was a bit of 'copper essence' (whatever that might mean, I didn't ask), it would be a fine session beer. Is it better than what else is out there? Not by much if at all, but the more the merrier, right?

Almost next door we stumbled on Eleven Shillings Parkhurst Ale, yet another brewery sprouting like a mushroom after a highveld thunder storm. Sold only in Parkhrust but brewed in Jeppestown, these folks started out in January 2013 with big ambitions. They are currently serving up 800 liters a month but hope to make it to 5000 by this time next year. Whether another crisp, lightly hopped ale will support such plans depends on aggresive marketing. They have a cool looking bottle so maybe they might just make a go of it. Certainly it's more likely to be remembered for its bottle than its taste. 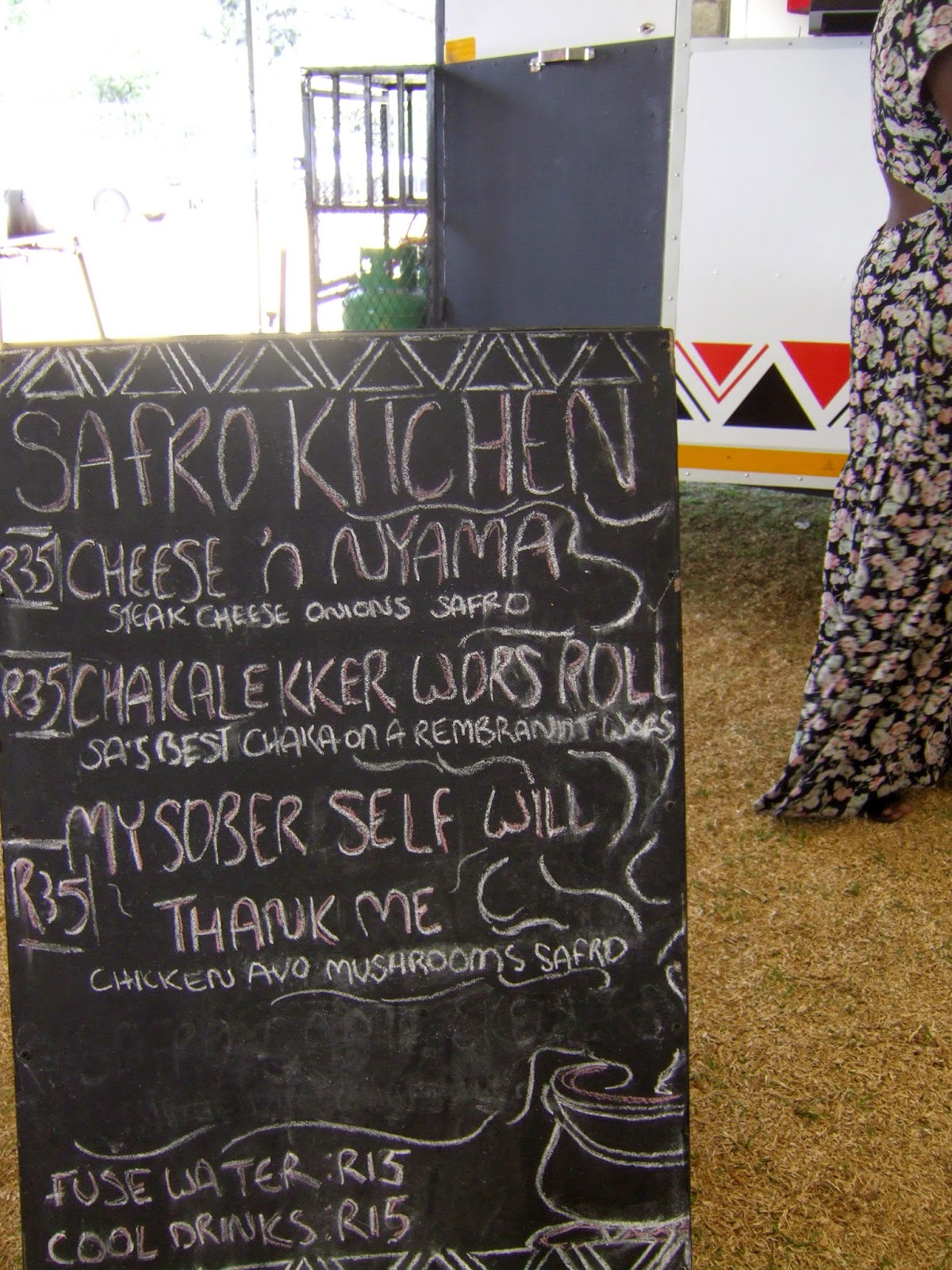 After all the beer, we were lured by a striking chiskopped lass to lunch at the Safro Kitchen . Mixed with the other too familiar food trucks, this one offered pretty much the only bit of colour in the food market and a citizens' prices. There was a 'cheese 'n nyama' roll which Ralph scarfed down and an off the menu chakalaka veggie one for me. Best food deal in the place with a bit of ekasi flavour.  At only ten weeks old, they are destined for good things. Check them out soon at the Fox Street Food Market.

Last up was an old favourite, Smack brewing Smack! Republic Brewing from Maboneng. Now a few years old, they remain one of the few local brewers that cares more about flavour than markets. That they can't keep up with demand suggest the South African market may be more diverse than many think. Today we tried their experimental bourbon milk stout. Made with lactose and bourbon-soaked vanilla pods, this was undeniably flavourful stuff.  Not quite the smooth, warm roundness of the Goose Island but delicious all the same At 5.5% it's easy drinking but believe me, you'll know you drank. Consider this a desert beer really. As for us, that was a good way to finish up before checking into ICU for some rest, reflection and serious rehydration.