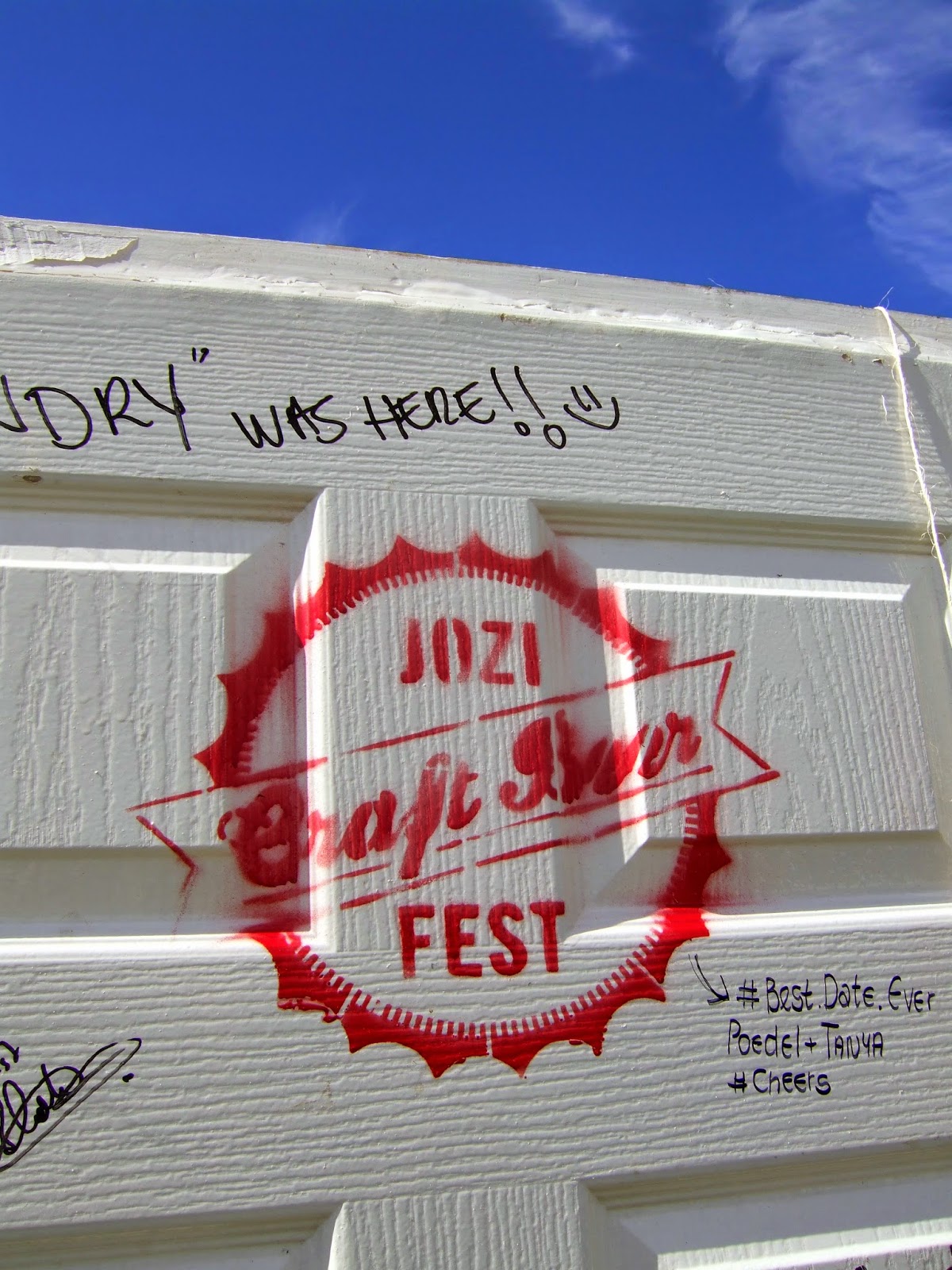 Walked through jam packed parking lot to make it to the 2014 Jozi Craft beer Fest. Credit to the good people at League of Beers for organising the mechanical bull and

ping pong tables. True Jozi style? Don't know much about the city's cowboy heritage but all can be forgiven when bathed in that gorgeous autumn sun with just enough high  clouds to keep us from roasting.


Speaking of roasting, there was food too. The vittles will be largely familiar to regular Johannesburg market goers: mustachioed Balkan Burger, overpriced pulled pork tacos absent any Mexican zest, undercooked paella seasoned with what tasted like aromat, and slightly spendy but solid fire roasted pizza. In true Mzansi style, there wasn't much for the vegetarians among us. For the few still eating dairy, the homemade ice cream looked good but we weren't in the mood for a float. Rather, it was the beers calling.

And there were beers.  Almost all the well knowns and a few local start-ups made the cut filling almost 30 tents with bottles and kegs.  Among them were a couple of distillers and one anachronistic (yet delicious) Scottish brewing company. For the most part, the staff were friendly, knowledgeable and proud of their pours. Yet there were a few baffling exceptions where the local ambassadors knew almost nothing of what they're serving. Telling you that a beer is popular is not quite up to snuff. But let me not judge -- at a place like this there is always another tap waiting for attention.

The first beer catching our eye was a Haarties local that had somehow escaped my lips for too long. From their good variety, we plopped our tokens down for Chameleon Brewhouse's American pale ale. Made with amarillo and cascade hops - words that sound so sweet with a heavy Afrikaans accent -- its captivating fragrance reassured us that it wasn't brewed with water from the nearby dam. The dark brown beer was capped with a good frothy head that stuck around until the very end. On the tongue it was smooth and fruitily hoppy - as one would expect from those hops - with a touch of sourness on the finish but nothing to erase the round balance at the beer's center. I half expected a hint of mampoer but certainly wasn't disappointed with what I got. Turned out to be one of the day's surprises.

Next up was Aces Brew Worx (sic) IPA. I've tasted their middle of the road lager before and can't say I've been much impressed. This is the first time seeing any other offerings most which were brewed especially for the festival on contract by an ex-Bavarian beermaker at Swagger brewery in Alberton. These trial balloons included a blond, a red, a pale ale, and an IPA. Not surprisingly we went Indian. At only 4.5% ABV - a good 2-3 points below what it should be - I was skeptical. They said it was made with cascade hops but since it was sub-contracted they couldn't be sure. In the sun the beer looked like a dark rooibos tea with a corporate looking head of big bubbles. The smell was fresh but faint and a bit lagerish. Things didn't improve much past the lips where there was almost no hop profile and the malt presented no sweetness or warmth. That wasn't so bad, but the chlorine finish was made less pleasant with evocations of President Zuma's fire pool. If this was a test, it passed like a Limpopo maths student. (To be fair we shared it with a couple others who proclaimed it creamy and delish, so to each his own. But I won't budge on something: that ain't no IPA).

After that disappointment, we took a break from beer to try out Drayman's single malt whiskey. I'm always pleased to see South Africa trying it's hand beyond brandy and as a whiskey drinker, what choice did I have but to give it a go? Their festival neighbours, Jorgensen's Distillery, have already established a fine reputation even if it's not nearly as tastily innovative as Inverroche (who were nowhere to be seen). Jorgies was showing off a 500 rand bottle of absinthe which I didn't have the courage (or the cash) to try so I stuck with Drayman's. While their Emporer IPA fell short earlier in the year, this was a perfectly drinkable whiskey that could rival an entry level Scotch. That they served the single malt with ice with nary a thought did make me wonder what they were hiding. That it was R400 made me think maybe they were hiding just how overpriced it was. At 200 I'd go local and buy, but not at twice the price.

Back to the beer and Standeaven Brewery's Three Hop IPA. I haven't been particularly chuffed by their wide variety of widely available offerings but the hoppy promise drew me to this one. The eponymous trinity included an experimental offering from Charles Glass mixed with the country's homegrown Southern Promise and Southern Passion. Shaun Standeaven took a break from pouring to explain that they made this festival special specifically to highlight the oft overlooked -- and somewhat maligned -- local hop offerings. Although it's not available anywhere else just yet, I hope it will be. It poured out with creamy head comprised of ultra fine bubbles. While it's cloudiness made it look like a slightly coppery wheat beer, its nose had enough floral hop aroma and light citrus lilt to claim its place as an IPA.  The fruitiness was there too as you drank although it faded as the glass emptied. So while it doesn't bang you with IBUs, it has a flavour that is comfortably distinctive. Sure, it is a bit watery without an alcohol punch, but it's balanced nonetheless. By far the best foot they've put forward. Maybe a new category: African IPA or, better yet, session IPA? I could certainly drink a few. And big props to Shaun and his fam for sticking South and highlighting what Mzansi has to offer.

Back to Jozi with Smack Republic and their Braamfontein Brawler IPA. Unlike Standeavan, these guys went all-American with imported cascade and amarillo hops. Having been on sale for a year - almost always on draft - it apparently isn't keeping pace with their golden ale and honey rooibos. Still, the brewers claim it sells and they're going to keep it flowing. At 4.1 percent it's also low on the alcohol, a persistent problem with the local IPAs. What it lacked in punch it made up for with its rich red copper color and a finely laced head. While their saison is seasoned with spicy black pepper, this one smelled sour. Alas, it tasted sour too. There's hops and malt but they were lost behind a kind of tamarind forwardness that might help explain why this isn't a best seller. I'd tasted it before at their brewery in in Maboneng and had fonder memories. From here on out, I'll stick with their Maboneng Maverick complete with rooibos and honey. No sourness there.

As things for us were winding down, we passed by the Brewhog's barrel and got to wondering what they were about. Turns out it's a new brewery in Kyalami with an SAB refugee making a premium pilsner and an original red lager. Still small and not yet bottling, they sell largely through the Hogshead restaurants and pubs. Although not normally inclined to lagers, I felt compelled to give them a go.  As it turns out, the red was tasty if mainly malty, as reds are wont to be. Served very cold and lightly carbonated it had a blockier, more corporate taste than anything else I had, but with an underlying freshness. Finished solid with a touch of sweetness from the malt. Maybe not my cup of tea but an undeniably nice beer and a giant step for womankind.

With our final tokens we revisited an old friend: the King's Block House IPA from Devil's Peak. I've reviewed the beer elsewhere and have no reason to redact any of my praise. That this nectar won South African beer of the year is no surprise given that it already clinched top spot in Mzansi Beer's IPA smack-down. That we got a full glass for half the price was a pleasant one. That they may open a brewhouse in Jozi by the end of 2014 is enough to make the heart sing. The rest of you better bring your A game.

A big hand to the folks at League of Beers and Jozi beer fest for pulling this together. Whoever you are, you know how to throw a party.