South Africans drink. Not everyone, but if there is something other than patriarchy and a braai than can unite the country, a dop might just be it. Even if South Africa’s centuries’ old wine tradition and galloping premium whisky market grab global attention, beer is what goes down our gullets on any given day: About 61litres of the stuff per year on average. Yet not all beers are created equal. As South Africa continues to transform, so too does its favourite tipple. 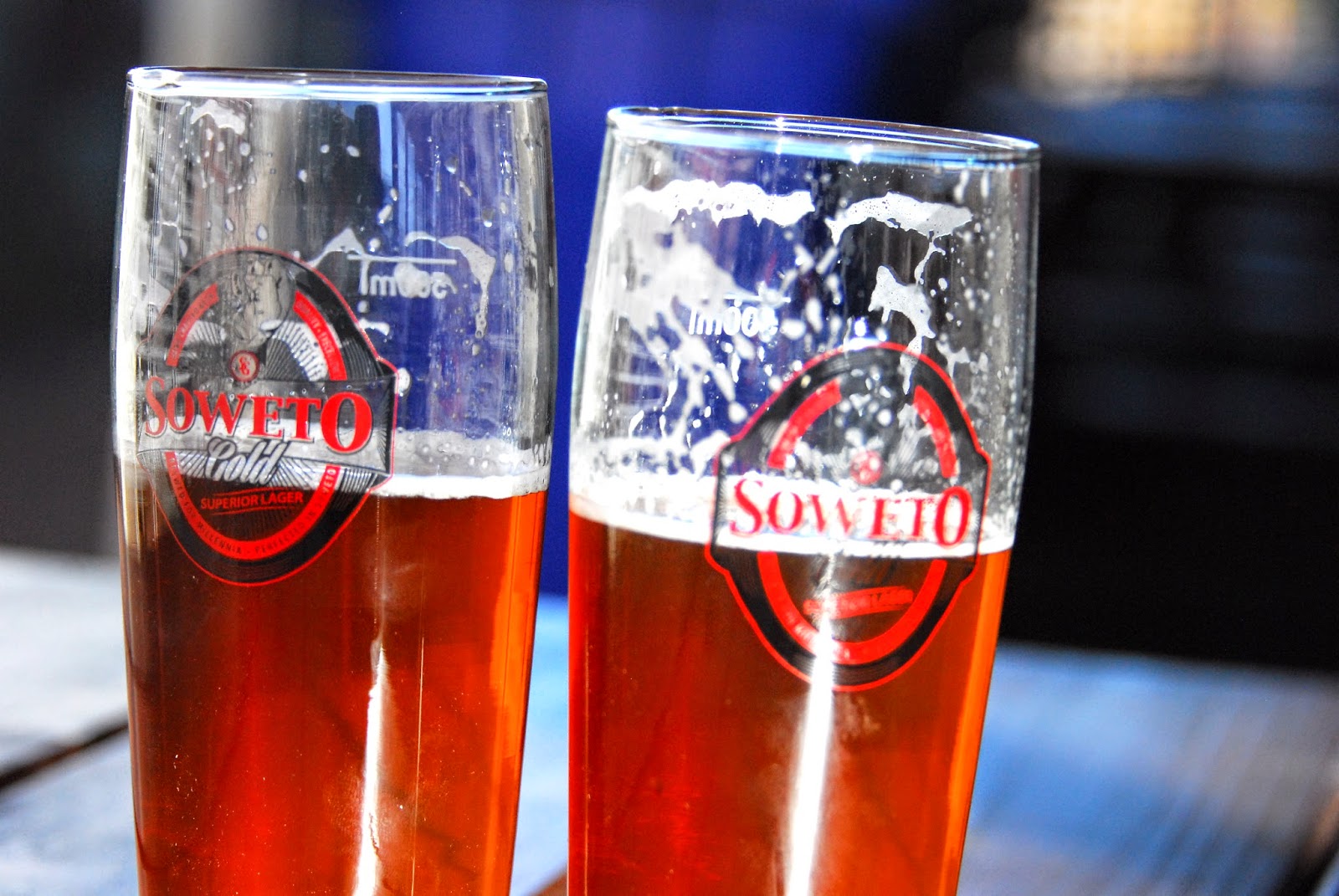 SAB-Miller is a marketing behemoth whose dominance of the domestic market has bred despondency on the fringes.  Their global conquests have supplied a pirate’s booty of domestically brewed ‘imports,’ but these are little more than old beer in new bottles. Yet the serious beer drinkers must not despair. While many promises of 1994 have yet to be honoured, at least we have the freedom to drink good local beer in our lifetime. Starting in the 1980s in sleepy Knysna, Mitchell’s brewing began the assault on SAB. Never intending to see Charles Glass face the guillotine, Mitchell’s and their craft brewer kin were more Luddites than Jacobins. Dedicated to producing less processed, fresher more flavourful brews; they set out to capture a niche market of discerning drinking loyalists.

For almost two decades the craft brewers soldiered on, joined in their march by small-scale breweries in Clarens, the KZN midlands and around Gauteng. And then things changed. From around 2010, the fuse they lit has led to a craft brewing explosion. Following trends from Berkeley to Brussels, beer is flowing as never before: rich with malts and redolent of hops grown at home or brought in from around the globe. Although hardly challenging Charles Glass’ dominance of the South African beer business, the craft brew movement has captivated a growing subset of South African drinkers. In what might first seem a marketing paradox, SAB is supplying and supporting the craft industry’s growth. Keen to push price points up for their own premium products – a quart sells for well under R20 at an eKasi spaza; a craft beer might sell for four times that amount – they are delighted with new markets for wallet draining drinks. But while reaching a broader public, most of the new brewers are following Mitchell’s proven marketing strategy: small scale local production aimed at a relatively well off, largely pale-faced following.

And then things changed again. Inside the (partial) transformation of South Africa’s beer industry is another uniquely South African transformation. Leading the way are two remarkably different brewers with an intertwined past. Both part owners of their respective breweries, Apiwe Nxusani and Ndumiso Madlala are out to change the flavour and colour of the craft brew seen. Recognising the inherent limits of brewing for an affluent minority, these two are busy crafting beers with more mass appeal. And with these strategies they hope that the colour of money will accompany the rich golds and reds being served up frosty in a pint glass.

Having served their time working for SAB-Miller in various roles, these two have the brewing experience, technical skills and training to coax almost any flavour from the yeast, malt, hops and water that goes into their beer. (Graduate science degrees and international brewing and distilling diplomas? Who knew there were such things?)  A self-professed beer nerd, Apiwe is not much of a drinker but has been captivated by the brewing process since she visited an open day at the University of Johannesburg. “I’m like chef; they don’t eat a lot. They just eat to appreciate the tastes they’ve created.” Ndumiso also came of age at SAB-Miller, climbing the ranks alongside Apiwe before branching out in 2011 to start his own operation. When investors failed to pitch, he headed back to overseeing SAB breweries across Africa and learnt even more about brewing and branding. A great beer lover – our outdoor interview was accompanied by a delicious winter sunshine and pulled pint combo – Ndumiso saw the opportunity to reach an untapped, African market ready to step out on SAB.

Labouring on opposite ends of the city geographically and socially – Apiwe deep in middle-class suburbia; Ndumiso in the heart of Soweto – the two nevertheless have a similar reading on how to enchant the beer drinkers whose thirsts will feed their bottom lines. For Apiwe this means creating a ladder to more complicated, tastier beers. With her Brewhogs Pilsner and Red Lager she’s building, “a bridge to people who are used to drinking lagers. What we make is drinkable; it’s more like what they know. We want to play around in the lager field, but it will be lager with a twist.” Being a taste fundi, she experiments at home with more outlandish inventions but realises that South African taste will take time to follow along the yellow brick road.

Ndumiso’s approach is equally calculated but he hopes to bypass Oz and get straight to El Dorado. Soweto Gold is not a aimed at beer connoisseurs, nor is it intended to take its drinkers on a gustatory journey. Instead he has created a full flavoured beer to capture the lucrative Black market. “If you look at the recipe, it has similar property to Carling Black Label. It’s slightly sweet, lowly hopped.” He adds special malts and a proprietary yeast blend to up the flavour profile, but is not too bothered if drinkers don’t savour the difference. “What we’re selling is also an aspirational product. We are adding something for them at the top end. There are taverns here in Soweto that out sell those in Sandton in single malts and exclusive products. We want to tap that market.” And tap it he has. With his Orlando brewery only set to open in late July – he currently crafts in Nottingham Road Brewery’s KwaZulu Natal facility – he is already outselling SAB products in select pubs around town. With a planned onsite canning facility and new varieties coming up he is riding a brand wave likely to lift him and his investors to prosperity. Look out for a Pirates-inspired Orlando Stout in black and white and a clear sorghum, maize and malt beer sure to be a hit with Ndumiso’s KZN homeboys.

As with any South African industry, race matters. Apiwe is proud of what she has accomplished and the role she can play in transforming the business: not only wresting total domination from SAB, but adding diversity to the craft brew scene. There is evident pleasure in startling people out of their comfort zones. “We serve my beer in restaurants and festivals and people are often shocked when they find out I made it. Obviously first because I’m a woman, then because I’m black.” Ndumiso does nothing to disguise his background instead making it foundational to the brand: “I’m the face of this company. I’m critical to where we are going. When I give the beer to my friends in KZN, they love it. One thing I can tell you about people there, they enjoy anything from Johannesburg. When they see that this is done by one of their own, I know it’s going to sell very well.”

But this is beer after all, so while race will always be an issue, people would prefer to bicker over malt or hop profiles or football prowess. Soweto Gold may be mining the Black market, but almost everyone living in South Africa – and wealthy foreign tourists keen for a taste of the fabled township – can sip proudly from their trademark golden cans. White Braamfontein hipsters are already savouring the stuff. If you can crack that uber-cool crowd, who knows who is next. Apiwe’s hopes are, like her, somewhat more muted: “There are a few home brewers who are black. Sometime they call to ask me for advice. Hopefully with time there will be more as I’m often the only black person in the room. Still, I’ve never felt I don’t belong. When they ask, I tell them – and honestly this is how I feel – that we are like one big family; we’re all there for the love of beer.” Cheers to that.

You can taste Brewhogs at the Kyalami brewery on Friday afternoons or whenever the mood strikes you at the Hogshead restaurants or select pubs around Gauteng.  Soweto Gold is pouring from ever more taps across Gauteng and Cape Town or from their brewery bar in Orlando West’s uBuntuKraal.

Note: This is a longer version of a Mail & Guardian article available just by clicking here.