Following Mayflower to the New World

Mzansi beer has stepped out on the South African scene for a while but I'm hardly ashamed of my infidelity. To appreciate what you've got, you have to remind yourself of what else is out there.  In this case, I've crossed the oceans in search of new tastes and titillations. Not quite making it to the west coast heartland I've landed at the very origins of American brewing, New England.

Where better to start this new world adventure than down the road from the Plymouth Rock at Mayflower brewing? We rolled into the industrial park on town's edge as snow started falling. Having come so far, we buried our worries of getting home and headed inside. Instead of fleeing we turned to a flight of five big small beers (maybe 5 oz each). For ten bucks this seemed the way to go.

We started with an 'English Style' IPA, an homage to the motherland which chased the poor pilgrims away. Rather than bursting with hop flavours like some of its west coast kin, it maintained its stiff upper lip and balance. Stepping away from its ESB kin, it presented a touch of butter on the lips with an almost sour flair on the back tongue. In between the mouth filled with rich warmth emanating as the lightly carbonated, golden yellow beer sloshed around. Only downside came from the presentation: served in clear plastic cups it resembled something you might leave at a doctor's. I suspect it tastes much better but I'll leave that comparison for others. Instead I turned my attention to beer number two, a bourbon coloured Spring Hop Ale. A bit less forward than the IPA it first reached the nose with scents of fresh turned ground befitting the name. A red ale with some extra vooma, it offered good bitterness without the grapefruit promised by the heady dose of Citra. Where the citrus showed was in a taste of rind lingering after the beer had made its way down your gullet.

As we readied for the next glassfuls, the tasting room canned with animal pictures circulated on a decidedly remedial phone. A newly engaged gent sipping away at bar's end explained his new fiancee was a zoo keeper and occasionally brought rescues home for the weekend. The six foot giraffe pup was too tall to get in the house but they managed some time with a baby roo.  Seems they sleep best when tightly swaddled and hung from from the a door knob. If they kick, bring them some milk. After learning of a controversial 'therapy Kangaroo' taken to court in Oklahoma, we got back to beer.

Next up was their almost mythical double ipa. Named after John Alden a pioneer who served as the Mayflower's cooper and later as a general man about town in new Plymouth. This is easily one of my favorite east coast beers, rivaled in its range of tastes and hoppy bonanza by Ithaca Beer Company's Merry Prankster inspired Flower Power.  Rich and balanced as Douple IPA should be. Not super boozy like some at only around 8% but packing a punch of wild flowers and almost explosive citrus bolstered by Pacific Northwest Mosaic, Chinook, and Citra hops. But what the great beer lord gives with one hand he takes with the other: this is part of their cooper series, a once-off thing that you've got to catch as catch can. Once it's done, there'll be no more. Which is a crying shame. While it helped me navigate a chilly February day in Boston, it would do perfectly for for a chilled Cape Town beach-side afternoon. Alas not only is their run short, but their distribution reaches only the six New England states. Almost makes it worth a trip to Hoth.

If you do get to these parts but find the DIPA doesn't float your shallop, turn to their remarkable scotch ale. I've never been a fan of this beer strain, but this one's smokey malts, rich color and hoppy roundness make it something like a Lagavulin and lager. It was a slow burner after the DIPA's effervescent flavors but it sure beats a Pina Colada this time of year. Coating your tongue with the flavors of a slightly sweet and confident spirit, this beer feels no need to be showy: it stands confident, strong and tasty. One can't help think of pipes, fire places and long cozy evening spent in kilt-comfort. 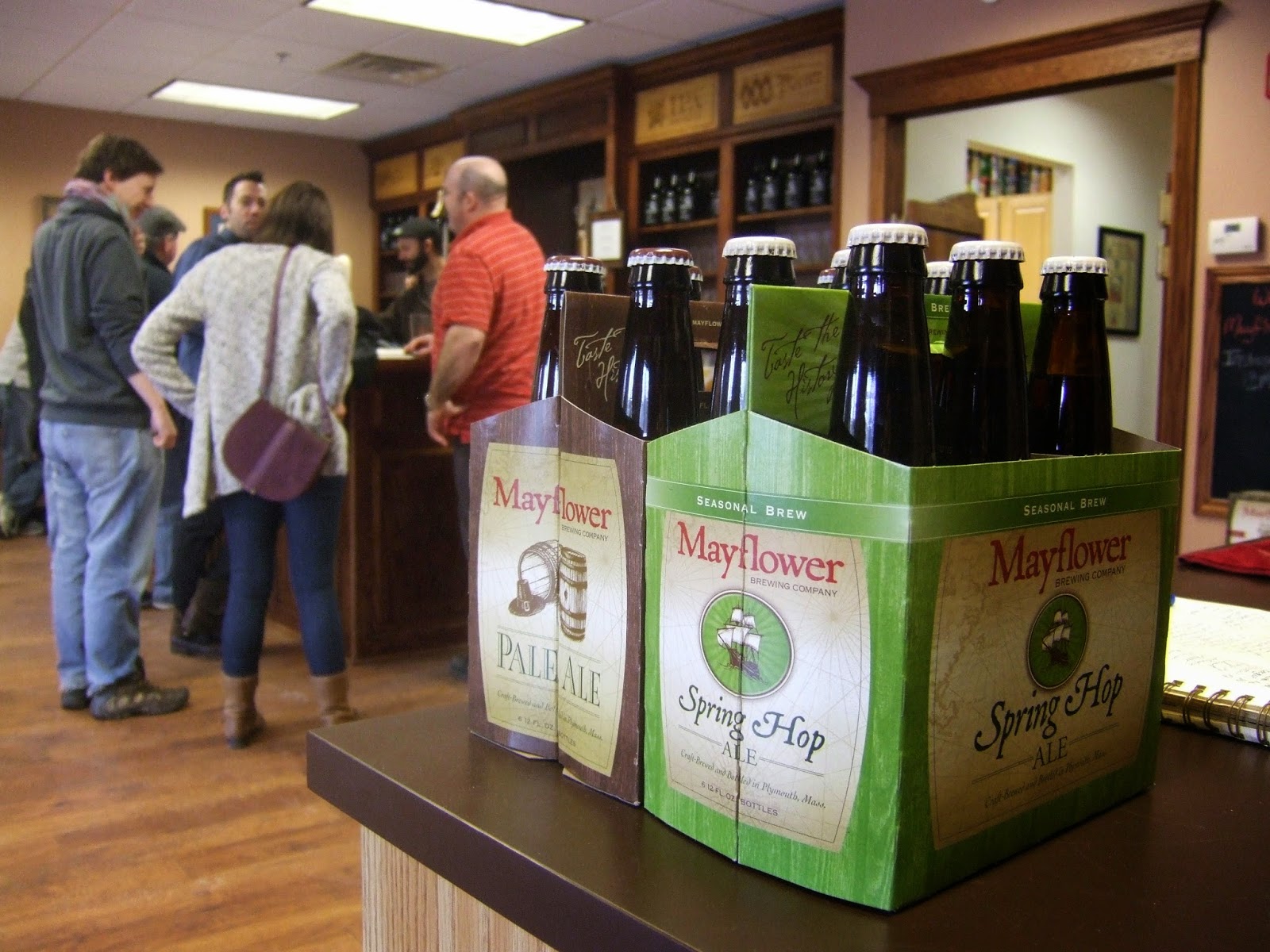 We finished the day with their perennial porter.  Capt Kangaroo at the end of the bar waved its flag, "the pride of New England," he declared. I could see it: plenty of charred maltiness without belly dragging heaviness. Like Mayflower's others, it was balanced and crisp. Still, given my druthers, this wouldn't be my blizzard buddy.  Indeed, I wandered out into the darkening sky with packs of DIPA and Scotch Ale in my hands. The ultra-religious pilgrims might not have approved, but if they had to go to work on a dark Monday morning without their therapy roo, I'm sure even those resolute pioneers might relish a bottle or two.